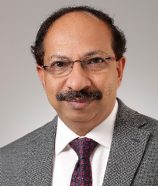 Dr. K. R. Suresh Nair has been an IEEE Member for the last 29 years. He is not just an exemplary leader, but also a vibrant volunteer. Suresh Nair was a major influencer in the founding of Kochi Subsection and raising it to become one of the best subsections in the region, with more than 150 events every year, over the past few years consistently. Due to his true leadership, and his dedication to volunteering for the IEEE community, he continued to be the Chair of Kochi Subsection for a record third term, on insistence of the members. While the usual path to being elected the Chair of a Section is via initially serving the supporting roles of either Vice Chair, Secretary, Treasurer, etc., due to his excelling performance as the Chair for Kochi Subsection, he was unanimously elected the Chair of Kerala Section in 2016-17. He was elected as IEEE India Council Chair Elect for the years 2019-20, and then as Chair for 2021-22.

Dr. Suresh Nair, alumnus of Department of Electrical Engineering, IIT Bombay has spent his initial career at government R&D lab of Ministry of Information Technology, Government of India. He then joined a multinational industry, as Global Chief Technology Officer heading the technology strategies. Under his leadership, many novel products in healthcare, communication, industrial, aerospace and defence domains were designed and many are finding excellent market acceptance globally. Dr. Suresh Nair is presently the Chief Technology Advisor to Foundation for Innovation and Social Entrepreneurship, an initiative of Tata Trust. He also founded two companies, Design Alpha and Biophoton Technologies. He is focusing only on socially relevant products and projects.

Dr. Suresh has more than 120 publications, 16 US patents and 2 Indian patents and co-authored three books. Suresh Nair and his team took up the challenge of building the first and only indigenously built E-Scientia project, which required immense foresight, planning and energy to achieve success. In addition to his regular profession as Global Chief Technology Officer of NeST group, he was leading the E-Scientia installation team every day from 5pm until midnight, continuously for over 2 months. Though the project faced many hardships, it was his inspiring leadership that brought together all the volunteers – from students to young professionals to senior members, to work together relentlessly for the grand success of the project. The immense response E-Scientia received from the government and the public, speaks volumes about the impact it has made in the community, and helped further IEEE’s visibility. His willingness to volunteer down to the ground level, sets an unachievable example of his commitment towards his fellow volunteers.

Irrespective of his senior position, he is always down to the roots of volunteering, all the while engaging and inspiring the volunteers. Dr. Suresh Nair was the first Section Chair to organize an India Council Execom meeting in Kerala, and his objective of bringing demographic togetherness started from there. He brought in increased collaboration between sections, a major reason for which is also his warm personality.

During his tenure as the Chair of Kerala Section, the number of events went beyond imaginable levels (more than 1000 events in 2017) to the extent that even an enquiry was constituted at IEEE India Office level, to check on the genuiness of this. This was definitely found to be true and confirmed by the officials. This example alone speaks volumes of what the section, its OUs and members have been able to achieve under his leadership. He initiated and implemented various strategies to increase the memberships, and during his tenure the Section received appreciations for member retention and growth. He is a man who thinks big. He volunteered to undertake the responsibility of hosting TENCON 2019, which was a great success and brought surplus funds to Region 10 as well as to Kerala Section.

A very dedicated volunteer and a hardworking individual, during his tenure Kerala Section came to be considered a role model to all other Sections not just in the country, but globally. His contributions led him to being elected the Chair-Elect of India Council – only the second person from Kerala Section in over 20 years. This is another prime example of acceptance of his leadership by members across the country. He has been conferred with many awards including the IEEE MGA Achievement award (2 times), IEEE Outstanding Researcher award, DST Lockheed Martin award 2014 for the top innovation as Rank No.1 in India, BV Baliga Award, IETE OE Award, to name a few.

He is Chairman of many Government of India committees on R&D, member in various government Steering committees like MeitY, DSIR, etc. He is also in the Project Management Group of Maker Village, member in Nidhi Prayas, DST Healthcare Hub, etc. He is Distinguished Fellow Optical Society of India, Fellow IETE, and Senior Member IEEE. Dr. Suresh is an active promoter of academic-industry association, and his passion is to mentor youngsters as entrepreneurs. He believes in continuously sharing the knowledge to youngsters and has given over 250 invited talks covering over 30,000 students.